When Callie, a twentysomething New York traffic reporter, promises to take on a cat from “some friend of an old friend of someone,” she arranges to leave quickly the drop off so that she doesn’t get drawn into a dull evening with a stranger. She is an expert at avoiding conflict, which serves her well in the city. The stranger named Sara on the other hand, has willingly left her job at a Quaker school in St. Louis to teach third-graders in the Bronx.

Although both are “straight” women, they circle each other warily, nursing an unspoken attraction. The playwright’s choices lend a bittersweet quality to even their lightest exchanges, allowing us to wonder – along with the two women – whether the violent outcome of their single kiss makes it a bad idea.

"Stop Kiss revises Romeo and Juliet, with one thug and the mores of a nation standing in for the family feud."
Regina Marler 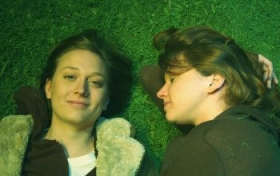